A downloadable game for Windows, macOS, and Linux

This is the second game me and my friend Sklaiser made, and it's a remake of Plaque Attack, the iconic Atari 2600 game where you control a toothpaste and destroy foods. We made it for Highjam #1, which theme was exactly to choose an Atari game and remake it.

I think we did pretty great! At least comparing to the first game we ever made, Archer Hunter, which was kinda of incomplete. This time the development was strangely more fluid but also harder, however the result was also better: this game is complete in a sense, has a better feel, has music, and (hopefully) less glitches.

Also, once again, feedback is more than welcome!

So, in the jam we were tasked with choosing a Atari 2600 game and reimaginating its mechanics with the current gaming scenario in mind. Sklaisor suggested Plague Attack, and since it looked like a good choice, we went along with it. When adaptating it, we thought of including a upgrade system; however, these are maybe too common nowadays. So, we gave it a twist: along with each upgrade, you also get to choose a downgrade, that makes the game harder.

This way, there really is no absolute best option: since the downgrades might make even the best upgrade a risky choice, the player must think cautiously when making them.

The controls are very simple, and there are two options:

Also, you can use the mouse to make choices as well, and press "Enter" to pause de game. The bombs can be used to clear the screen up. Also, notice that you can hold the shoot button to keep shooting.

I, Keyband, made the code, some of the art (the background and foreground), some of the sounds, and the music. As you can notice, I'm learning how to make each one of these things, so they may not be perfect... The softwares I used were the following:

Sklaisor made the great majority of the art (read that as all the art), and was the primary tester (boy, he sure had a lot of things to test). He used:

I also would like to thank Magodev, which made the fonts we used here and was very kind to make then Public Domain with CC0. He also participated on this Jam, so be sure to go see his entry!

Source code and other things

You can check the (very messy) source code here:

Feel free to use the assets, and maybe try to learn some new stuff from the code. Credit isn't needed, but would be nice if you gave us :) 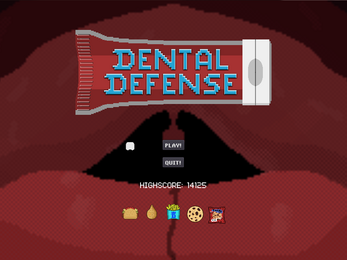 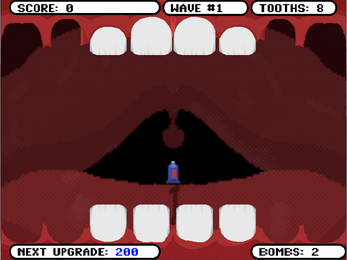 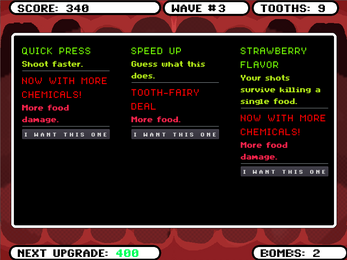 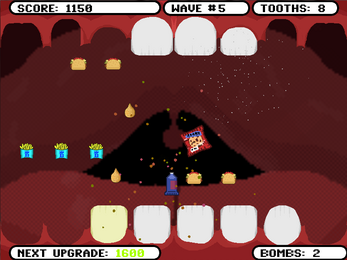